Download Festival scooped the major accolade at the UK Festival Awards 2013 at a ceremony presented by comedian Phill Jupitus at London’s Roundhouse on Monday, beating the venerable Glastonbury to the fan-voted Best Major Festival award. 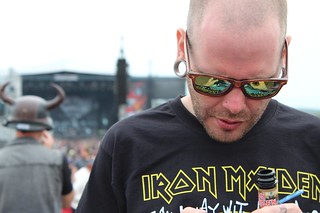 The accolade, for the rockers’ festival which won overall Best Line-up last year, suggests Download has found the sweet-spot between a strong musical identity appealing to a distinct community and the fuller, more positive overall experience all festival-goers now expect in return for substantial ticket prices.

The 90,000 people who attended in June 2013 were rewarded by blistering main stage sets from a broad range of rockers including Slipknot, Iron Maiden, Rammstein, Queens of the Stone Age, Motorhead, Limp Bizkit, Korn, Alice In Chains, Enter Shikari and The Hives while The Red Bull Studios presented hot emerging bands. Gig highlights included some energetic audience participation during Slipknot’s Spit It Out and a spitfire in the sky heralding the arrival of stalwarts Iron Maiden.

The ten year old event at the historic site of the original heavy rock festival, Donington Park in Derbyshire, is still very much about the music, but now also features substantial markets, late-night entertainment, funfair and cinema. The classic weather – Saturday mudbath followed by sunny Sunday – the carefully selected, diverse food on offer and friendly security may have helped Download shine in the memories of voters.

Another interesting winner was Daft Punk, who played no festivals this year but still won Anthem of The Summer for “Get Lucky”, suggesting the music in bars and markets is as much a part of the festival experience as the onstage action. The award was accepted via video message by Chic’s Nile Rodgers, who played bass on the track. 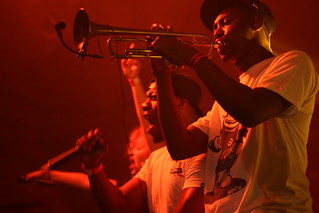 Glastonbury did receive acknowledgement from voters, winning Best Headline Performance for the Arctic Monkeys, while Rudimental, who turned up at everything from Glasto through Best Overseas Festival, Snowbombing, to Best New Festival, We Are FSTVL, pipped Disclosure to Breakthrough Act of The Year. The journalist-judged Best Line-up went to the estimable Latitude which this year featured a spectacular performance from Kraftwerk plus an impressive list of festival exclusives including Mark Lanegan, White Denim, Yeah Yeah Yeahs, and Yo La Tengo.

Among the festivals we worked with this year, we were delighted to see Camp Bestival reclaim its Best Family Festival crown and Barclaycard Presents British Summer Time take home the brand new, jury-selected Best Use of New Technology prize. Peppermint Bars sponsored the panel-judged 2013 Promoter of the Year Award, which went to the wonderful Paddy Glasgow of Northern Ireland’s grass-roots year-long new-music festival, Glasgowbury.