The Peppermint-sponsored Promoter of the Year award at the UK Festival Awards 2013 went to Paddy Glasgow, promoter of Northern Ireland’s Glasgowbury and assiduous supporter of the country’s new music scene. So, what is it about Paddy that makes him such an inspiration to his industry peers?

A genuine passion
The most inspiring festivals are often the expression of a vibrant grass-roots music scene.
Paddy got the festival bug at 16, after seeing Deep Purple at Knebworth. He’d already heard enough of his older brothers’ blues and rock collections to be hooked on music, and was soon performing himself. Yet his first venture, in 2000, was a cancer charity fundraiser in memory of a lost friend.
He quickly recognised an urgent need for an infrastructure to support a wealth of raw musical talent in the area around his Draperstown home, particularly outside the cities. His vocation had found him. 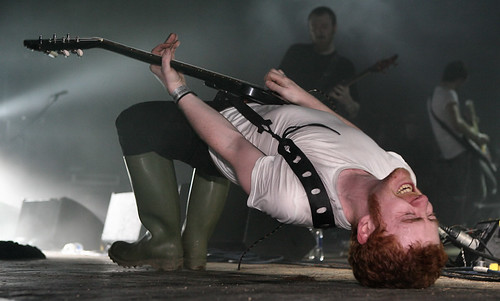 And So I Watch You From Afar, pictured at Glasgowbury by Shane Kelly

A clear vision
Over thirteen years, the annual Glasgowbury festival grew to a two-day event at Eagle’s Rock in the Sperrin Mountains, winning multiple awards while retaining its character as a not-for-profit enterprise fuelled by the energy of volunteers to provide a platform for local talent.
Paddy never sought to compete with big-budget festivals like Electric Picnic, preferring to keep his event “Small but massive.” Now an umbrella for year-long new-music events plus workshops and outreach activities, Glasgowbury is instead working toward supporting more and more budding musicians and technicians across a growing geographical area.

Powers of persuasion
Paddy had to tackle some initial resistance to the festival, as he told Culture Northern Ireland: “Anything that is innovative frightens a lot of people. But when people arrived, it wasn’t this mad rock and roll festival. People were friendly and came from all over Northern Ireland to have a good time.”
His persistence and infectious enthusiasm has since been rewarded by Tourist Board and Arts Council funding and endorsement by Derry-Londonderry City of Culture. Meanwhile, the Glasgowbury name, a joke that stuck, is graciously tolerated by uber-festival Glastonbury. “It’s cool. We were never going to be a threat to the grandmaster.”

Irrepressible energy
The 2013 Glasgowbury festival was the final, full-scale event, but there’s no hint of Paddy resting on his laurels – rather he’s bursting with ideas for new ways to showcase local talent to broader national and international audiences. His rapid speech reflects a relentless commitment to what he modestly insists is local ‘people power’.
After collecting his award he said: “I’m looking forward to our next venture that is Glasgowbury’s Cornstore Creative Hub in Draperstown, in which we will continue to work with many creative individuals for many years to come.
“Look out for Small But MASSIVE, we may appear near you!”