Keep out the cold with our hot booze recipes

As the temperatures plummet, the British inclination to socialise out of doors doesn’t seem to diminish. Whether you’re having a bonfire-side gathering or welcoming home skaters or holly-and-ivy foragers, warm their cockles with a lovely communal hot tipple. Don’t forget to make a more innocent version for any kids, as they won’t be happy to miss out on a warming treat. 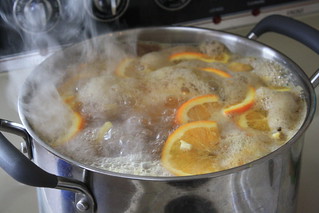 Orange & Ginger Mulled wine
There’s nothing more festive than mulled wine, and this recipe foregrounds two of its flavours making it distinctive and zingy.

Boil 500ml water and stir in 100g sugar. Zest two oranges and a lemon. Halve the lemon, peel and slice one orange. Stick the other orange with 15 cloves. Peel a 2cm piece of root ginger and halve lengthways. Stir in the fruit, peel, zest, ginger and a stick of cinnamon then add two bottles of red wine. Cover and heat gently without boiling for 15 minutes. Strain before serving in a big bowl that’s been pre-warmed with hot water.

Pimms Hot Punch
This simple treatment of the spiced, brandy-based variant of the ready-mixed fruit cup transforms it into a delicious punch with ease.

Gently heat 150ml Pimms Winter Cup with 400ml apple juice, with an apple and half an orange both cut into small chunks and a cinnamon stick. As soon as it simmers, take out the cinnamon and serve from a warmed glass jug.

Hot Buttered Rum
Make a batch of this winter classic because everyone’s going to want one these scrummy circulation-boosters.

Blend 100g of unsalted butter, 3 tablespoonsful of honey, a tablespoon each of vanilla and rum extracts and a teaspoon each of ground nutmeg, cinnamon and allspice and keep the mix in a sealed jar in the fridge. To make a mugful, add a tablespoon of the mix to a measure of white or dark rum and top up with hot (not boiling) water.

If that all sounds like too much effort, you can work wonders by adding a dash of brandy or whisky to an ordinary hot beverage. Here are a couple of fancy versions you can use to impress your guests: 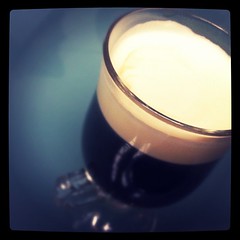 Combine half measures of Kahlua and Irish Whiskey in a large mug, top up with strong, freshly made coffee and top with cream for an ultra-sophisticated version of Irish coffee.

After Dinner Mint
Make a big mug of strong hot chocolate more grown up by adding a measure of peppermint schnapps. Stand a mint candy cane or chocolate mint ‘matchstick’ in it for extra decadence.

Best enjoyed in front of festive TV with no plans to go back outside.