Quantities of drugs seized at music festivals across the UK have declined significantly over the last three years, according to figures released under the Freedom of Information Act which provide a unique insight into changing patterns of drug use at British music festivals.

The data, which covers festivals taking place over four years – from 2008 to 2011 – shows drug confiscations peaking in 2009 but falling away rapidly in the years since.

On the Isle of Wight it’s been largely about cocaine and ecstasy, at Glastonbury the hauls of ketamine have been creeping up, while the drug of choice for heavy metal fans would seem to be Jack Daniels and other booze.

As a tens of thousands of young (and not so young) music fans await another festival season, new figures based on police activities at 10 major festivals over the past four years provide an insight into the range and scale of drugs seized.

They show that seizures of popular drugs such as cannabis and ecastasy have been in decline, possibly due factors such as changing behaviour, demographics and policing priorities.

Cocaine seizures have been in sharp decline since the onset of the economic hard times, and there is some evidence to back up suggestions that recreational drug users have been turning to relatively cheaper drugs like ketamine, the horse tranquilliser dubbed the ‘new ecstasy’.

Individual events also meanwhile display particular characteristics when it comes to the type of drugs seized.

The lion’s share of cocaine seizures last year took place at the Isle of Wight festival and the island’s other big musical event, Bestival, where 50,000 people enjoyed an eclectic mix of rock, folk and dance.

The two festivals also stood out from the others in terms of ecstasy seizures, accounting for nearly half of the value of all drugs seized at Bestival last year.

By contrast, drug seizures were almost non-existant at the Womad (World of Music, Arts and Dance), often regarded as the festival of choice for a stereotypically Guardian-reading, older music fan. Last year, the only drugs confiscated in swoops by Wiltshire Police was cannabis with a street value of £151.

Expectations that rock fans meanwhile might be prone to emulating some of their harder living idols are also somewhat confounded. Seizures were comparatively low at the two festivals catering for them – the Download festival in Leicestershire and Sonisphere at Knebworth House, Hertfordshire.

At Sonisphere, where 190,000 fans last year moshed along to bands including Motorhead and Slipknot, just over £400 of drugs was seized across the weekend. It was mostly cannabis, with cocaine making up the balance. Ecstasy and amphetamines were absent.

At the country’s best known gathering of music lovers, where Glastonbury organisor Michael Eavis last year said that the drug culture “had changed beyond belief” and that it was “a cheek to even suggest there’s a problem”, more than £200,000 worth of drugs has been seized by police over the past four years.

Last year’s haul of more than £44,000 was a rise of 12% on the previous year although, like other festivals where larger quanties of drugs have been confiscated, seizures are considerably down on 2009’s relative high.

Across all 10 festivals – Glastonbury, V, the Isle of Wight, Bestival, Download, Sonisphere, Leeds, Reading, Womad and Wireless- there has been a sharp decline since that year in the value both of cocaine and cannabis seized, according to the figures obtained through a series of Freedom of Information requests by Request Initiative, a nonprofit that makes requests for charities and NGOs.

The graphic below shows total street values of drugs seized in 2011, with figures broken down by substance and festival 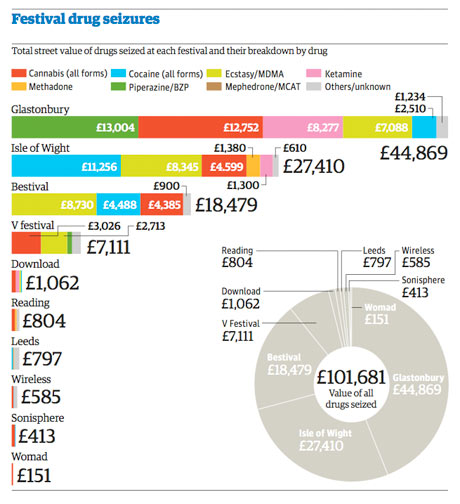 Peppermint says; Good work Police! You don’t need drugs to have a good time at a festival, they have no place. Just come and visit one of our bars!