THE PRODIGY
to join

Dance/Rock icons The Prodigy join Iron Maiden and Metallica as the third headline artist to be announced for an historic Sonisphere festival in 2014. Prodigy will kick off the weekend with a bang on Friday night followed by Iron Maiden on Saturday night and Metallica closing the festival on Sunday. 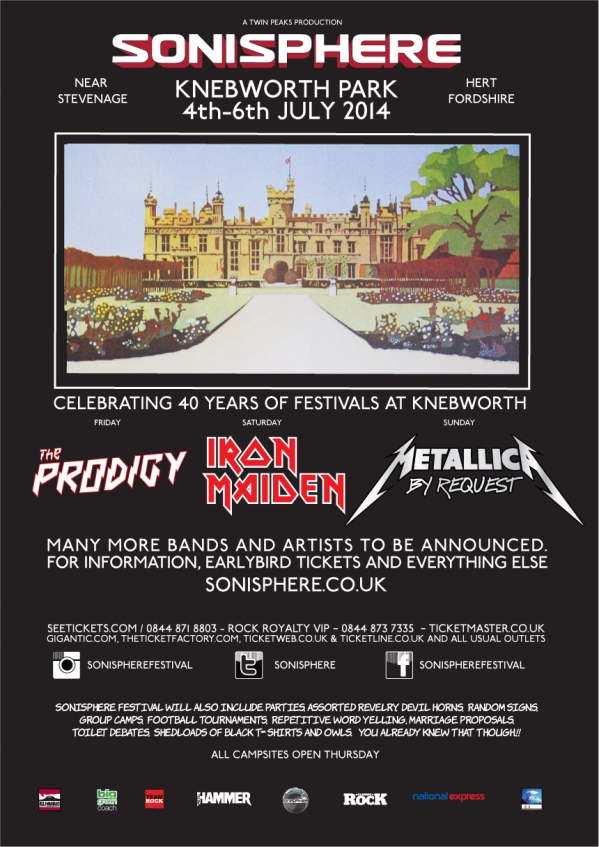 Emerging out of the UK’s early 90s rave scene, The Prodigy created a seismic shift in contemporary music by welding together industrial beats, punk-rock attitudes, aggressive vocals and searing guitars with their own unique take on dance culture, bringing rock, metal and rave fans together for the first time and becoming one of the most vital live acts in the world as a result.

Their festival headline slots have become legendary around the globe and so it is only fitting that they bring their uniquely brilliant stage show to headline at Knebworth Park for the first time, to make Sonisphere 2014 a truly memorable 40th Anniversary celebration.

“We cant wait to play Sonisphere 2014 , we will be hittin u with some brand new beats and noise
Respecto The Prodigy”

‘Here it is! We are ecstatic to announce that the Prodigy will be making a triumphant return to Knebworth to take up the position as the Friday night headliner on Sonisphere 2014, having previously played a legendary show with Oasis in 1996 to a 250,000 strong crowd. Famous for the sort of energy fuelled, insane and pulsating show that you can feel in your bones, we know that The Prodigy will bring something very special to Sonisphere. Adding this to the already announced headliner sets of Iron Maiden and Metallica is pretty much guaranteed to get the very  foundations of Knebworth House shaking.’

As previously announced, Iron Maiden and Metallica have never before appeared on the same UK bill, and will be playing no other dates in the UK this year. In addition Iron Maiden will be bringing their hugely acclaimed “Maiden England’ World Tour to a spectacular finale at Knebworth, featuring a setlist reaching even further back into their 80s catalogue than before, while Metallica will be performing their interactive ‘By Request’ set where fans will be able to vote online for any tracks from their 140-song catalogue, with the 17 most-popular choices being performed that night.

Making this event even more special is the fact it marks 40 years of rock concerts in the legendary grounds of Knebworth House. Sonisphere 2014 marks the return to Britain of the Sonisphere Festival which for the past five years has been the biggest pan-European festival, playing to audiences of over 1.5 Million fans.

Early Bird Weekend tickets for Sonisphere 2014 are on sale now priced at £170 (Limited availability). The highly popular £50 deposit scheme will also make a return in 2014. All Campsites open Thursday.